BBC invite back Paddlers for Life Windermere to Re-unite with Participants from the Queen’s Diamond Jubilee Pageant. 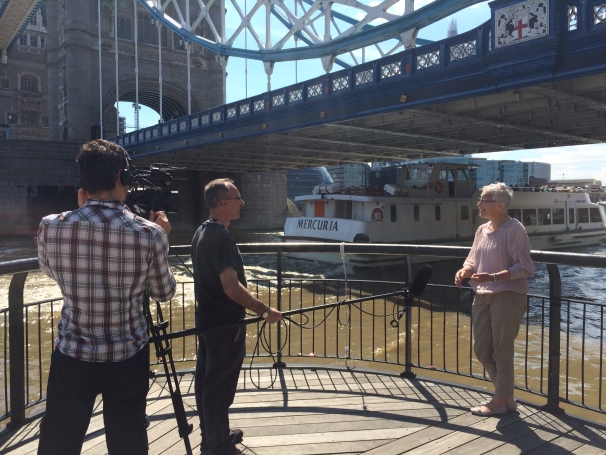 The BBC announced an invitation to Paddlers for Life Windermere to re-unite with participants from the 3 June 2012 Queen’s Diamond Jubilee Pageant on the River Thames. They predicted some mysterious features to the 13-14 July 2014 visit to London, not giving much away.

The interviews filmed on day one covered breast cancer survivors paddling, the logistics needed to launch the dragon boats on the River Thames and, of course, that royal salute which was worked on so conscientiously! Talking about the weather was a highlight, too. Remember the cats and dogs it rained! Curiously, none of the other interviewees and participants was anywhere to be seen. I was told to wait… until the following day.

The invitation appeared totally out of the blue and was an immense opportunity. I was shocked and surprised to discover that Paddlers for Life were one of just four Pageant vessels chosen out of over a thousand to be interviewed. Never posing a risk that the audience will be disappointed, we always tell a great story!

On day two I was re-united with Pageant participants, Geoff, Mark and George. Charged emotions, joy, compassion and awe rose as they retold their astonishing stories. The glorious warm and sunny day presented a boat trip next on the itinerary – not just any boat trip.

The Havengore, selected to carry members of the Royal Family as part of jubilee celebrations in the flotilla, welcomed us aboard. Members of the Royal Family who embarked on the Havengore for the Thames pageant were The Duke of York, Princess Beatrice, Princess Eugenie, The Earl and Countess of Wessex, The Duke and Duchess of Gloucester and Prince and Princess Michael of Kent. If that wasn’t enough, Rebecca, from the famous, very drenched (remember, it rained cats and dogs) jubilee choir, sang ‘Land of Hope and Glory’ as the Havengore sailed beneath Tower Bridge. The visiting crowds above roared and cheered their approval, just like on the day of the Pageant.

It was like being taken back in time. I could feel the lump in my throat. The movement of the boat, views of London’s landmarks and the cheering crowds made the Pageant experience all so very real once again.

The TV director asked me what is the legacy, today, for Paddlers for Life two years since the 2012 Diamond Jubilee Pageant? I said we aim to improve access to the unique experience of dragon boating, after facing breast cancer, to as many people as possible across the UK. Our message is, “Yes, you can do this, too.”
Report from Louisa.

Paddlers for Life meet the public at a Brockhole 'Come and Try' day.

No Replies to "BBC film a pageant reunion event."